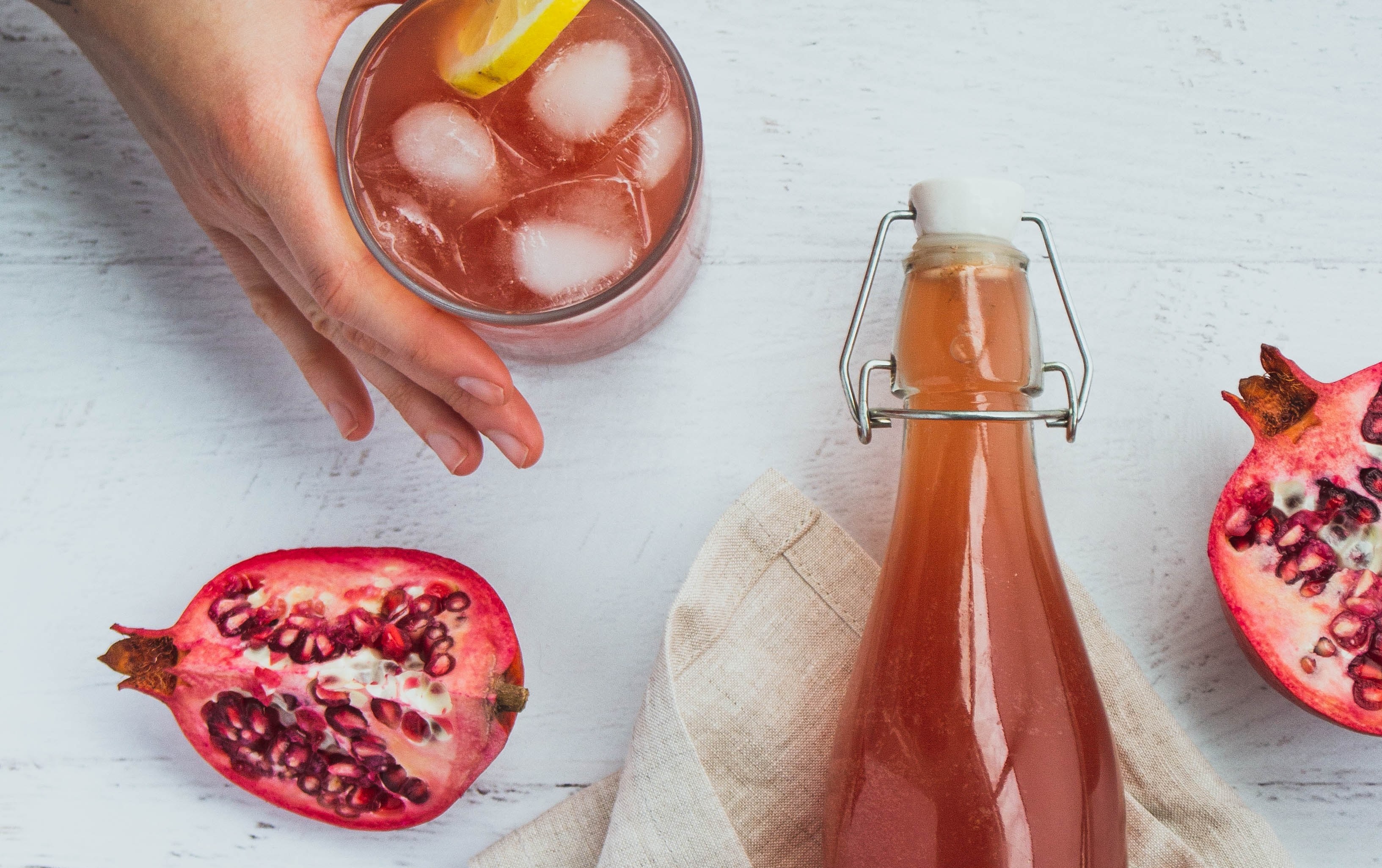 Kombucha is having a moment right now, or at least, so it seems. Extolled as the “elixir of life", a “hype drink” or even a “cure-all”, kombucha is praised all over the internet for its health benefits. But is this really true? Is kombucha actually as healthy as everyone seems to think? And what is in kombucha, anyway?

Although fermented foods have been a staple for millennia, and are well known in many cultures, kombucha has become popular only “recently”. It is reported that kombucha originated in north-east China in 220 BCE and, as a medicine, reached Japan in 414 CE, from where it spread via trade routes to Russia and eastern Europe.
Kombucha is the fastest-growing product on the market for functional beverages and is one of the world’s favourite low-alcohol drinks.

Kombucha is a drink made by fermenting tea (generally black tea, but sometimes green or oolong tea) and sugar with a symbiotic culture of bacteria and yeast (SCOBY) over seven to ten days. The SCOBY is a biofilm of micro-organisms that resembles a mushroom cap. It is used as the starter for the resulting concoction.
After fermenting, kombucha is a cocktail of chemical components, including sugar, tea, polyphenols, organic food acids, fibre, ethanol, amino acids including lysine, essential elements such as copper, iron, manganese, nickel and zinc, and water-soluble vitamins such as vitamin C and various B-vitamins, then carbon dioxide, antibiotic substances and hydrolytic enzymes. Depending on how long it is fermented for, kombucha can contain as much sugar as lemonade (up to 10 percent). And, as already mentioned, the fermentation process also produces ethanol, that is, alcohol, in a quantity of up to 2 percent. So kombucha contains a lot of things. But: is this cocktail healthy?

How healthy is kombucha?

Probably a great many of us would spontaneously answer this question with “very”, as many people believe that this functional foodstuff is good for the health. This belief is based on the extolled effects. The fermented tea is supposed to improve gut function, activate the immune system, stimulate the metabolism and purify the blood. But there is, so far, no scientific evidence of any of this. According to a 2019 review study, no study has yet proved the positive effects of kombucha on human health. Kombucha’s widely extolled health benefits are based exclusively on animal studies, such as experiments on rats, mice, rabbits, pigs, dogs and other animals.
Consequently, kombucha’s health benefits, in comparison with other fermented foodstuffs such as fermented dairy products, are certainly lower than the marketing industry suggests.

According to the German Consumer Association, kombucha is an innocuous, refreshing drink when properly made, although its caffeine, alcohol and sugar content should not be disregarded. Due to the alcohol content, kombucha should not be consumed during pregnancy.

Making your own kombucha

Yes, you read that correctly – you can make your own kombucha at home. However, caution is called for, as making it incorrectly may risk lead poisoning! When making kombucha at home, you absolutely need to use a suitable vessel (e.g., a jar). Reports say that several people who, over a period of six months, regularly drank home-made kombucha made in a ceramic pot with a lead glaze, suffered from lead poisoning. This is because the acids in the fermented drink dissolved the lead from the glaze.
Furthermore, you need to be very particular about hygiene when making kombucha. If kombucha is contaminated with external microbes, particularly moulds (mould poisons), it may cause problems for sensitive people, particularly those who are immunocompromised. If you follow the advice given above, you can tackle the home-made kombucha experiment. Have fun and don’t forget: consume kombucha in moderation!